Process chemistry is the branch of the pharmaceutical industry that deals with the development and optimisation of synthetic schemes and pilot plant procedures to manufacture compounds for the drug development phase. In contrast with discovery chemists who work with a narrow repertoire of chemical reactions, process chemists are tasked with identifying reactions that are safe, reproducible, and labour efficient. With the rising demand for quality and deadlines becoming more constricted, process chemists are under pressure to solve challenging chemical puzzles faster than ever before. Additionally, with financial resources growing more limited, it is difficult for chemists to meet the increasing process qualifications in laboratories. In response to this situation, Amigo Chem has developed innovative parallel chemistry workstations that provide chemists with greater flexibility and a broader scope for chemical applications. The Amigo Workstation has been designed to provide automated monitoring of up to 10 parallel reactions, helping facilitate a rapid and more thorough understanding of process parameters.

Parallel chemistry provides a way to advance projects quickly and thoroughly, and it also helps minimise the chances of suffering expensive losses in later stages of development. Amigo Chem offers a compact and low-cost parallel workstation for process chemists and discovery chemists alike. “With space being a premium in today’s labs, Amigo Chem has ensured that its workstation product is compatible with standard fume-cupboards, thus saving customers’ expenses even before the workstation is used,” says Mark Harding, Managing Director at Amigo Chem. The workstation’s parallel chemistry competencies coupled with its automation are vital toward ensuring the optimal efficiency for chemists.

Amigo has also identified that discovery chemists have slightly different automation requirements compared to process chemists. While process chemists can easily run ten variations of a particular reaction by changing parameters such as solvents, temperatures, and rates of addition, discovery chemists can only operate a few reactions simultaneously. In an effort to maximise usage of workstations, Amigo Chem has engineered novel Open Access products to support multiple experiments conducted by different chemists, all while working parallel to each other. The Amigo Open Access Workstation allows several users to run their chemistries simultaneously, as their colleagues are executing completely different recipes.

“We have received commendations from well-known individuals in the automation industry as the most intelligent equipment that supports parallel chemistry,” adds Harding.

The Amigo reaction block provides ten individually controlled reactions, with no temperature crosstalk between adjacent vessels that may differ by as much as 180°C. Intensively tight controls of reaction parameters are crucial for chemists who must adhere to robust pilot plant processes. Such a capability gives chemists excellent reaction flexibility at low chemical volumes while conserving valuable reactant materials. “Our intuitive and flexible control software can be tailored for each user depending on their preferences and expertise,” states Harding. He further goes on to say that Amigo Chem has met its primary goal of being able to deliver a parallel chemistry workstation for all chemists, not just those who have received specialised technical training. “Our mission is to create a product that is easy-to-use for not just software engineers, but process chemists too,” he adds.

Designed via a customer steering group inclusive of surveys, the first-generation of the workstation, launched in 2011, was received with great acclaims—such as AstraZeneca producing a poster titled “Amigo – A Chemist’s New Best Friend.” Four years later, Amigo launched its second-generation platform with expanded inerting and automated liquid additions. The new version of the software further expanded upon the workstation’s capabilities whilst a more flexible ‘Expert’ software module, with greater functionalities, was introduced for the more experienced user. As chemists’ workflow is often limited by reaction analysis, the organisation is also developing an injection module for fully scheduled on-line uPLC/HPLC analysis.

“I realised many years ago that too much effort spent developing product functionalities could alienate it from the end-user,” says Harding. This has been the driving force for Amigo Chem to engineer solutions that never require consumers to leave their comfort zones, and instead, are moulded to suit their specific needs. 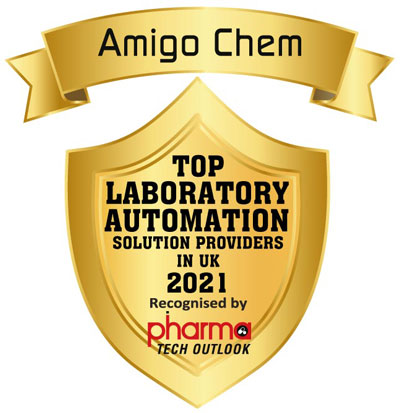 Description
Amigo Chem creates new and innovative parallel chemistry workstations that are designed via customer steering groups to control and monitor product synthesis, degradation and solubility studies. Amigo Chem offers the smallest and lowest cost parallel workstation for the Process Chemist. The Amigo Workstation’s price and ease of use provide a unique opportunity for a Pharmaceutical company to improve all Chemists’ productivity. Other commercial systems that are larger and considerably more expensive limit the Chemistry Department’s productivity to a centralised service offered by a small number of highly training users 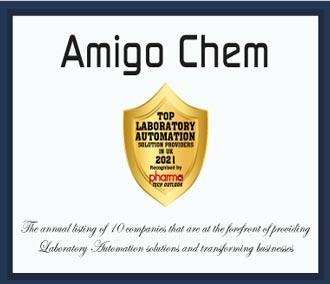 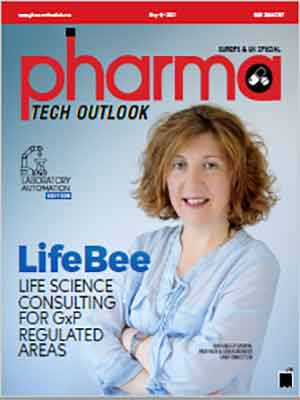